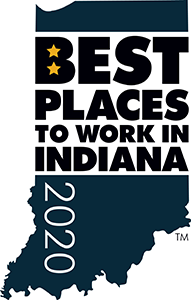 August 25, 2020: Brotherhood Mutual, a leading insurer of Christian ministries nationwide, has been named one of Indiana’s 2020 Best Places to Work. The company ranks 16th among large companies in the state. Rankings were announced August 24 by the Indiana Chamber of Commerce.

Brotherhood Mutual competed against other companies that employ 250 to 999 workers. The specialty insurer recently exceeded the 500+ employee mark and will add 300 more employees over the next decade. This is the 12th time Brotherhood Mutual has earned this award.

To determine the Best Places to Work in Indiana, companies from across the state participated in a two-part survey process. The first aspect evaluated each nominated company’s workplace policies, practices, philosophy, systems and demographics. The second part included a comprehensive, confidential survey that measured the employee experience. Combined scores determined the top companies and the final rankings.

About Brotherhood Mutual
Celebrating more than 100 years in business, Brotherhood Mutual Insurance Company is one of the nation’s leading property and casualty insurers of Christian ministries. The company serves more than 60,000 churches, schools, colleges, camps, and related ministries in 47 states and the District of Columbia. Headquartered in Fort Wayne, Indiana, Brotherhood Mutual is staffed by 500+ employees and works with 476 independent agents in 111 agencies nationwide. www.brotherhoodmutual.com