He received a paralegal certification in 1989 and became a chartered property casualty underwriter (CPCU) in 1993. Figgins serves on the board of the internet ministry RemedyLIVE, and he leads a small group at his church, Fellowship Missionary Church in Fort Wayne. 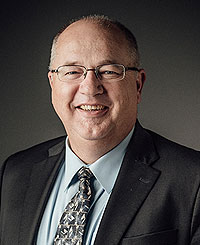 Hirschy holds an accounting degree from Manchester University. He became a certified public accountant in 1989 and earned the professional insurance designation of chartered property casualty underwriter (CPCU) in 2016. He serves on the finance team of his church, Pathway Community Church in Fort Wayne. He also serves on the advisory board for the Northern Indiana Fellowship of Christian Athletes.

Before coming to Brotherhood Mutual, Hirschy spent four years as the chief financial officer at a Fort Wayne, Indiana, biomedical firm. He spent the previous 15 years as a certified public accountant, serving at a Fort Wayne accounting firm and at Ernst & Young, LLP.

Brotherhood Mutual Insurance Company has more than 100 years of experience in helping Christian ministries manage their risks. The company insures more than 58,000 churches, schools, camps, colleges, and nonprofit ministries. It holds an “A-” rating from the A.M. Best Company and has more than $645 million in admitted assets. Headquartered in Fort Wayne, Indiana, Brotherhood Mutual employs more than 450 people and has earned a spot in the Indiana Chamber of Commerce’s Hall of Fame for consistently being named one of the Best Places to Work in Indiana.